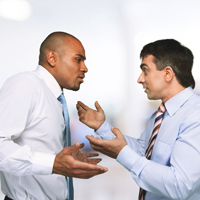 “His demeanour at this time was highly aggressive, flying his arms about and it was clear to me that he had to prevent himself from lashing out at me physically” (Trustee quoted in judgment below)

The irrational, aggressive and disruptive “Nightmare Next Door” owner is regrettably a well-known and much-disliked feature of all too many residential complexes.  He or she makes trouble at every opportunity, attacking other owners and the body corporate’s trustees with equal abandon.

What can you do about it?  In sufficiently serious cases, our courts will come to your rescue, as a recent High Court decision illustrates.

Harassment – it could be a ticket to prison …..

Because it was the owner’s “irrational and acrimonious behaviour” that necessitated the court action, the Court also ordered him to pay the Body Corporate’s legal costs on the punitive attorney and client scale.

© DotNews, 2005-2015. This article is a general information sheet and should not be used or relied on as legal or other professional advice. No liability can be accepted for any errors or omissions nor for any loss or damage arising from reliance upon any information herein. Always contact your legal adviser for specific and detailed advice.Errors and omission excepted. (E&OE)